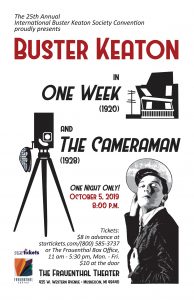 For 25 years, silent film and slapstick aficionados from around the world have been gathering in Muskegon, Michigan, to applaud the life and legacy of Buster Keaton, considered by many to be one of the greatest filmmakers of all time. The International Buster Keaton Society returns to Muskegon for the 25th time Saturday October 5, 2019.

Acclaimed Chicago theater organist Dennis Scott once again will provide live accompaniment for two Keaton silent films at 8 p.m. Saturday, Oct. 5, in Muskegon’s historic Frauenthal theater, 425 W Western Ave. The Saturday night open-to-the-public screening, a tradition since1995, is a way for the Keaton Society to give back to the community that Keaton loved and called “home.” This year audiences will see One Week (1920), Keaton’s first released independent short film, in which a newly married couple attempt to assemble a build-it-yourself house that has had the pieces mis-numbered, and The Cameraman (1928) the last major film made during the height of Keaton’s career, in which he plays the titular figure, who sets out to win over a local newsreel office secretary.