Lindsay Armstrong of Aquinas College was named the NAIA Women’s Soccer National Players of the Week. Armstrong were selected for her play during the week of October 6-12 and was chosen out of the conference and independent award winners. 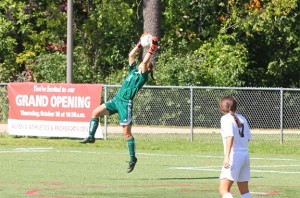 The junior goalkeeper from Fruitport manned the net for Aquinas in a pair of 1-0 victories, including a match against then-No. 14 Davenport. In 180 minutes of game action last week, Armstrong lowered her goals against average to 0.38 this season.
In her 13 matches, she has allowed five scores, recorded nine shutouts and currently holds a .906 save percentage.