The series began in February 2013 as a college class taught by Muskegon Community College instructors George Maniates and Kurt Troutman.  They had the vision to teach today’s students by combining classroom studies with a museum filled with WWII artifacts and introducing them to WWII veterans who lived what the students were learning.  Community members were invited to join.  They didn’t expect much of a turnout from the area, but the response has been overwhelming.  The community “students” couldn’t get enough and have been returning to the museum every year since for this exciting continuing education opportunity.

This wonderful series, which was featured last fall by an article in the New York Times, is ready to kick off the new semester on WWII, but with a little bit of a twist.  After conversations with a couple of focus groups, the lecture series will not only feature presentations on WWII, but it will also expand to cover other American military campaigns.

The USS Silversides Submarine Museum is proud to have such strong support from our local residents which allows us to continue to share our mission of honoring our military heroes through education with all generations.  We hope you will join us this year.  It will be a tremendous way to enrich your life and your mind and, we promise, no homework!  See you February 22nd.

Feb. 22: Horse Soldiers:  An extraordinary story of a band of US soldiers who rode to victory in Afghanistan.

Horse soldiers is the dramatic account of a small band of Special Forces soldiers who secretly entered Afghanistan following 9/11 and rode to war on horses against the Taliban.  Adventurist and author Doug Stanton is the featured speaker.

From the ‘Best and the Brightest’ to the fall of Saigon this is the story of America’s most controversial war – Vietnam.  Featured speaker is Lt. Col. Ron Janowski (Ret.), US Army, Instructor Junior ROTC.

Part One:  From Yalta to Potsdam. Part Two:  Raised in Muskegon, trained on the streets of Chicago, a special trumpet player boogied his way into the hearts of our soldiers.  Featured speakers are Muskegon Community College Historians George Maniates and Kurt Troutman.

March 21: How do we Memorialize War through Art?

Over the last 150 years, we have sought to honor our veterans and commemorate events of national significance through art, however, some artworks were not initially embraced by the public and controversy swirled around them.  The featured speaker is Tim Norris, Art Historian, Muskegon Community College.

March 28: Endurance – The Stories of our Korean War Veterans

Based on interviews with hundreds of Korean War veterans, the presentation Endurance offers insights from those veterans on the Korean War.  Featured speaker is Lynnita Brown, Korean War Educator Project.
April 4: Live from the Front, byline Ernie Pyle

A lecture that traces FDR’s 12 years in office from the Great Depression in the 1930s through dealing with a two-front war in the 1940s.  Featured speaker is Gleaves Whitney, Director of Grand Valley State University’s Hauenstein Center for Presidential Studies.

Admission to the World War II Lecture Series can be had by purchasing an annual membership through the USS Silversides Submarine Museum or paying a $7 admission fee to attend any one lecture.

For more information on the Lecture Series, visit silversidesmuseum.org or call 231-755-1230. 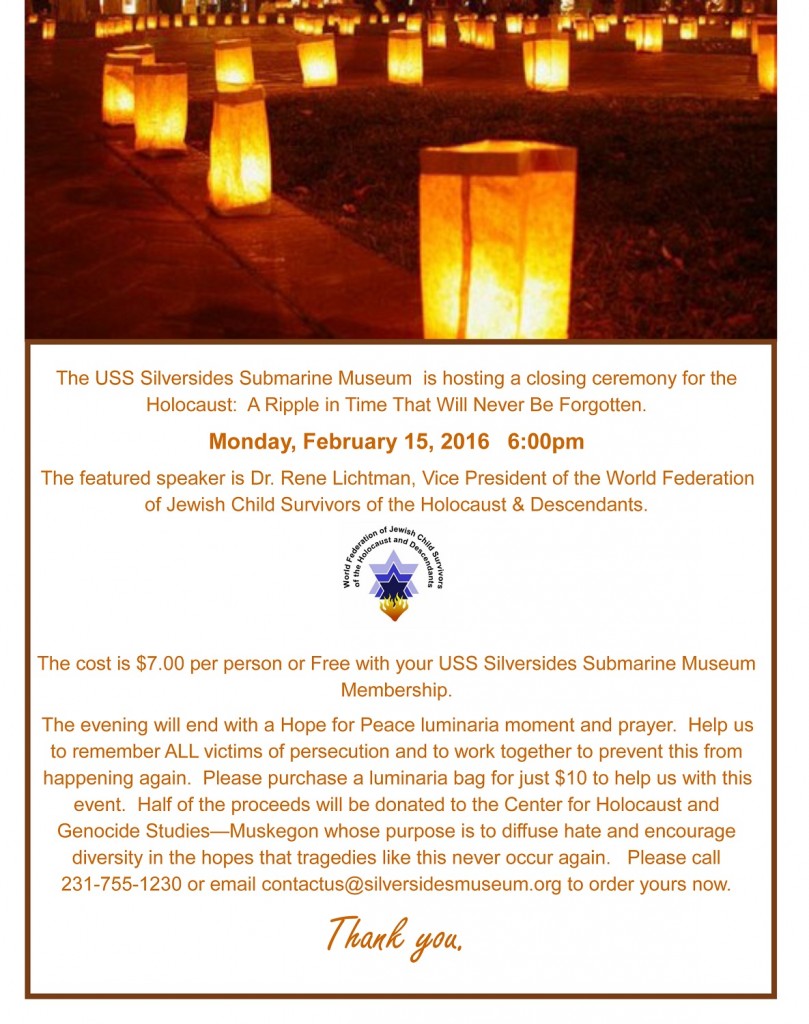