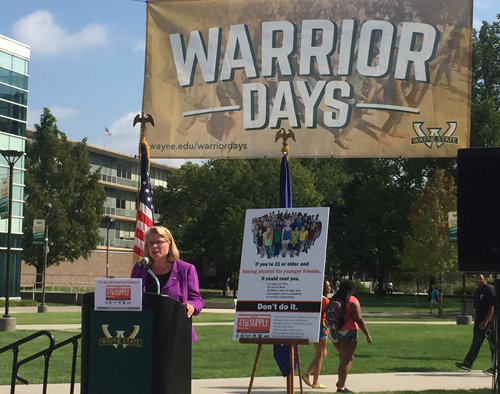 Secretary of State Ruth Johnson talks about the consequences of providing alcohol to minors and curbing the access to alcohol for those who are not of legal age.

DETROIT, Mich. – With the backdrop of thousands of returning students at Wayne State University’s central campus, Secretary of State Ruth Johnson and a consortium of state, county and local officials kicked off a targeted campaign this morning to curb underage drinking and drunken driving.

The statewide “21 to Buy, Not Supply” college campus campaign seeks to raise awareness about the legal and far-reaching consequences of providing alcohol to minors while curbing the access to alcohol for those who are not of legal age.

“Our target audience is young adults who turn 21 and suddenly have access to increased privileges and responsibilities,” Johnson explained. “We know their younger friends may turn to them for alcohol, especially on college campuses where house parties and tailgates are such a temptation, but our message is don’t do it. There is too much at risk.”

Other coalition partners attending the event included representatives from the Alliance Coalition for Healthy Communities, Oakland County Health Division, and the Office of Highway Safety Planning. The press conference was staged at Gullen Mall, near the WSU Student Center.

In Michigan, the penalty for providing alcohol to a minor can be $1,000 in fines, up to 90 days in jail and legal fees of $5,000 or more, but broader consequences could include lost wages, forfeited scholarships and even expulsion from college.

According to the National Institute on Alcohol Abuse and Alcoholism, underage drinking increases the likelihood for unwanted pregnancies, personal safety issues, sexual assault, suicides and traffic crashes. Such outcomes are tracked in Michigan by the Pacific Institute for Research and Evaluation, with a reported 745 teen pregnancies linked to underage drinking in 2013 and 442,000 disorderly conduct crimes in 2012.  On Michigan roads, the rate of alcohol–related traffic crashes is greater for drivers ages 16 to 20 than for drivers age 21 and older.

Colonel Kriste Kibbey Etue, director of the Michigan State Police, urges young people to avoid jeopardizing their future by supplying alcohol to minors. “Many young people are unaware of the laws and penalties for supplying alcohol to underage peers,” Etue stated.  “Because it is important to the Michigan State Police to reduce underage drinking, drunk driving and alcohol-related traffic crashes, our troopers will take enforcement action for this and other alcohol offenses.”

National statistics show that more than one third of young adults aged 18-25 are binge alcohol users and about 1 in 10 are heavy alcohol users. (Source: 2014 National Survey on Drug Use and Health) Such data is the reason this public awareness campaign is targeting college campuses this fall.

“Keeping alcohol out of the hands of minors is one of our greatest challenges,” Johnson said.  “In 2003, the Secretary of State’s office began issuing vertical driver’s licenses for those under 21 to clearly represent their underage status. Since then, the state has seen a steady decline in the sale of alcohol to minors from convenience stores, bars and clubs.”

That trend also reflects the concerted efforts of the Michigan Liquor Control Commission (MLCC) to prevent minors from obtaining alcohol through Michigan businesses.

“We’re working every day to ensure no licensee of this state illegally sells alcohol – directly or indirectly – to anyone under the age of 21,” said MLCC Chairman Andrew Deloney, a key partner in the “21 to Buy, Not Supply” campaign. “We do that through education, training, and a thorough enforcement of Michigan’s liquor laws.”

“College students are just starting out on the great adventure that is life,” Johnson said. “The ‘21 to Buy, Not Supply’ coalition wants to help ensure that these young people make the most of the opportunities they have and avoid ill-advised and illegal acts that can ruin their futures before they even get started.”