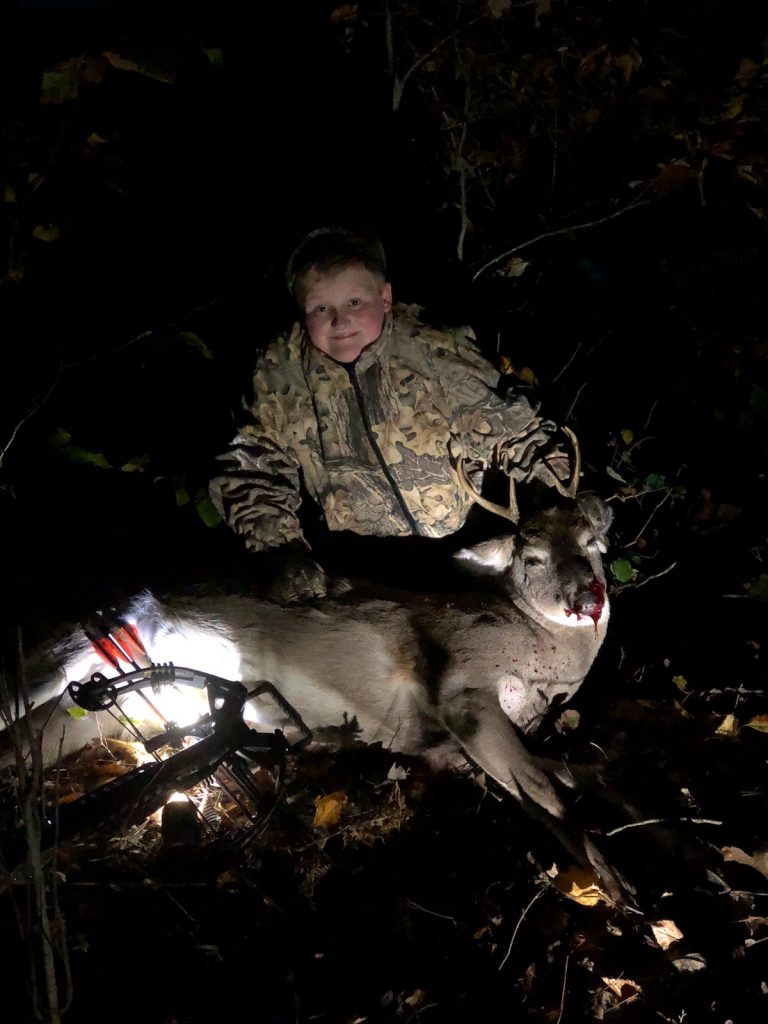 Caleb Przybylek’s first buck, a 6pt, shot on November 3 with a crossbow at 25 yards out. He has a heck of a story if you want to hear it. He is a 7 th grade student at Fruitport Middle School .

Let me start by telling you that I was not too enthused about hunting this year. That’s until Caleb came home from school about a week before the youth hunt, and told me he wanted to hunt and shoot a deer this year. I am an avid hunter and I have definitely been blessed but just felt like my hunting was missing something. Well I got our crossbow out and we went and sighted it in and let’s just say Caleb only needed to take one practice shot, bullseye first shot at 20 yards. So the youth weekend was here and it was gonna be miserably hot. I warned him that it was probably gonna be too hot to see deer, and we saw none. I was worried, for I just got him to hunt and not seeing deer can be a turn off and he told me he didn’t care to see deer he just wanted to spend time with me😢. It’s now the third week of bow and I can’t get him to come back out with me, but he got me excited about being out and I shot a 5pt. We hunt state land so just seeing bucks at times is tough. I went up on the 27th of October again by myself and I had a real nice 6pt coming in but I could not shoot it but knew my son could and that this might boost his confidence. I came and talked him in to going by telling him I guarantee you’ll shoot a deer, possibly a buck. I convinced him to go with me on Friday nov. 3rd and not 20 minutes in the stand, 4:15 to be exact the 6pt was coming in. I had Caleb pick up the bow, turn the safety off, and get ready. I could see he was getting nervous. He was shaking and breathing hard so I whispered to him over and over to take deep breaths and calm down. I also told him to aim at his shoulder and to not take it off. Caleb had to hold the red dot on him for 10 minutes until he cleared a few trees. He was doing so great being patient letting that buck take his time and he did not speed the shot, I teach him to never take bad shots. Finally the buck turned his head only to look behind him and in doing so he stepped forward a foot giving my son a shot. I was gonna tell him to shoot but before I could he did. Direct hit right through the heart, it only ran 20 yards and dropped. The deer did not suffer, for it was a perfect shot. I look to Caleb and say good shot and grab the crossbow so he doesn’t drop it in excitement. Then I noticed Caleb was in full tears.. I asked if he was crying because he’s sad he killed a deer and he said no. I said why then do you cry, he says to me these are tears of glory dad, I never thought I would ever shoot a buck. He didn’t know but I shed a tear myself, because I knew exactly what I was missing in my hunting, my new hunting partner Caleb. On the way home the fun competition and heckling started toward me, Caleb was teasing by saying I shot a bigger deer than you dad. I smiled and said yes! Yes you did. I so look forward to future hunting with him and my other 3 kids in the future. Thanks for letting me tell you this, Caleb is an amazing 12 year old trying to find who he is like most boys and girls his age and he lacks confidence in himself. After this hunt, I’ve seen a change in him and see him starting to gain confidence.