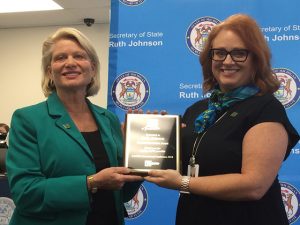 The national organ donation advocacy group Donate Life America has awarded Secretary of State Ruth Johnson its DMV Innovation Award for her and her office’s efforts to promote organ donation and encourage people to join the state’s donor registry, she announced today.

Johnson praised and thanked Secretary of State staff today during the announcement at the Flint Area SUPER!Center for their tireless efforts that resulted in a dramatic increase in the number of people on the donor registry. The secretary was joined by Gift of Life Michigan CEO Dorrie Dils; John Gleason, the Genesee County clerk and a donation recipient; and representatives from Eversight, the state’s cornea and eye tissue recovery program.

“I’m so proud of our team and grateful for this honor,” Johnson said. “We’re seeing miracles happen every day with organ, tissue and cornea donation thanks to these great people. It’s been a privilege working with them.”

Johnson made huge changes in the way the Secretary of State’s Office approached organ donation when she took office in 2011. Working with her partners, she created an advisory task force, put organ donor reminders on widely-used forms, enlisted social media and directed employees to ask customers if they wanted to sign up, doubling the percentage of names on the list. About 85 percent of people who sign up do so through the Secretary of State’s Office.

Since that time, the registry has grown from 27 percent of Michigan adults in 2011 to more than 64 percent to date, with the registry now topping 5 million names. The Secretary of State’s Flint Super!Center, host site for today’s event, added more than 49,000 people to the registry during that timeframe, mostly from Oakland and Genesee counties.