issued by Citizens Commission on Human Rights of Florida 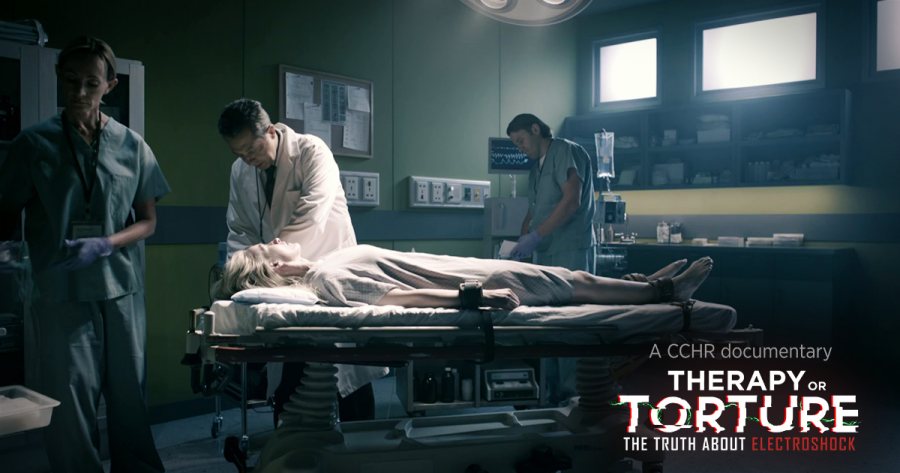 In 1976, California was the first State to recognize the dangers of electroshock—and prohibited its use on children under the age of 12. More than 40 years later, the FDA has failed to ensure clinical trials prove that ECT devices are safe and effective.

CCHR’s latest documentary is a wake-up call to protect 100,000 people, including children, pregnant women and the elderly from electroshock treatment.

CLEARWATER, FLORIDA, UNITED STATES, November 25, 2019 /EINPresswire.com/ — The Citizens Commission on Human Rights (CCHR) International’s latest documentary, “Therapy or Torture: The Truth about Electroshock” aired on the Scientology TV Network over the weekend and is now part of a series of compelling award-winning CCHR documentaries available on the station. Electroshock, also known as electroconvulsive therapy (ECT), is the passage of up to 460 volts of electricity sent through the brain causing a grand mal seizure. Psychiatrists admit they don’t how it “works” and that it cannot cure, but 100,000 Americans and over 1 million worldwide are administered it every year. The documentary flanks CCHR’s campaign to have ECT banned as outmoded and dangerous. An online petition has nearly 110,000 supporters.

Craig Newnes, a clinical psychologist and author of A Critical A-Z of Electroshock!, is one of many experts interviewed for the documentary. He calls the treatment “electrocution. That’s all it is. They don’t call it electrocution; they call it Electroconvulsive Therapy because it has a magic three letter acronym, E-C-T. And one thing it isn’t is a therapy.”

He further states: “The outcome of that is it destroys brain cells. And the more brain cells you destroy, in theory, the better it is for the person. The biggest mystery of all is why on earth people think that putting bolts of electricity through people’s heads is a good idea.”

Jonathon Emord, a constitutional attorney who is challenging the U.S. Food and Drug Administration (FDA) over its classification of the ECT devices, says ECT “is ultimately imparting large amounts of electricity, many times the voltage you would get even if you stuck your finger into a light socket.” The mental health industry doesn’t “deny that there are disadvantages to ECT,” but “they minimize them. It’s a sales pitch.”

“This is an atrocity, and the FDA does nothing. They need to be held accountable while governments override them and ban electroshock in mental health practice.”
— Jan Eastgate, international president of CCHR

Some of that pitch is that anesthetics and muscle relaxants now given before ECT is administered, lessens the risk of breaking bones and trauma. But Fred Shaw, an international spokesperson for CCHR and former law enforcement officer said, “If you are awake and get hit with a baseball bat, it’s obvious that you would feel a lot of pain. But if you’re unconscious and get hit with a baseball bat, your body goes through that same trauma. So why are psychiatrists arguing that the body doesn’t go through trauma just because somebody’s unconscious? It’s assault and battery.”

Dr. Genevieve King, a physician, explains in “Therapy or Torture”: “The more seizures a person has, the more potential there is for cognitive decline, different neurologic dysfunctions and more and more seizures.” Adds neurologist Dr. Ken Sharlin: “Having recurrent seizures potentially reduces the life span of that individual. It has an impact on mortality.” He observed ECT being administered during his medical training, thinking even then, it was “barbarian.” He says: “I thought it was truly one of the most obnoxious things I’d ever seen done to a human being. A huge percentage of these people have brain damage.”

The documentary includes archival and current footage of ECT being given with patient testimony from electroshock survivors, including:
• “I went through a neurocognitive testing six months after and I lost approximately about 50 points of IQ”;
• “I didn’t remember my name, I didn’t remember anything. I didn’t remember what happened the day before. I didn’t remember anything at all”; and
• “I was pretty much tortured. I was being forced to have this treatment. I didn’t like it, I didn’t want it. And when I was honest with the doctors about how it affected me and I told them, they just interpreted that as part of my depression…. What was done to me was really, frankly, evil.”

Manfred Nowak, a former U.N Special Rapporteur is interviewed, stating: “Against-your-will electroshock therapy is in my opinion absolutely prohibited” and constitutes “torture.” A July 2018 U.N. Human Rights Council report called on governments to recognize that forced psychiatric treatment, including ECT, are “practices constituting torture or other cruel, inhuman or degrading treatment or punishment….”[1]

In 1976, California was the first State to recognize the dangers of electroshock—and prohibited its use on children under the age of 12. More than 40 years later, the FDA has failed to ensure clinical trials prove that ECT devices are safe and effective. Yet, in October, 2018, the manufacturer of one ECT device warned of “permanent brain damage” is a potential risk.[2] This followed a California lawsuit which had recently settled. The attorney representing the plaintiffs in that case wrote: “the United States District Court for the Central District of California ruled that there was sufficient evidence for a reasonable jury to find that the prominent manufacturer of ECT devices…caused brain injury in the plaintiffs by failing to warn their treating physicians of the risk of brain injury associated with ECT.”[3]

Jan Eastgate, international president of CCHR, who has documented hundreds of cases of ECT damage, says: “This is an atrocity, and the FDA does nothing. They need to be held accountable while governments override them and ban electroshock in mental health practice.” She urges ECT survivors and their families to report electroshock abuse to CCHR.

CCHR, the mental health industry watchdog, was established by the Church of Scientology and renowned professor of psychiatry and author, Dr. Thomas Szasz in 1969 to investigate and expose abuses in the mental health system. L. Ron Hubbard, founder of Scientology, first brought psychiatric imprisonment to wide public notice: “Thousands and thousands are seized without process of law, every week, over the ‘free world’ tortured, castrated, killed. All in the name of ‘mental health,’” he wrote in March 1969. For more information visit www.cchrflorida.org.