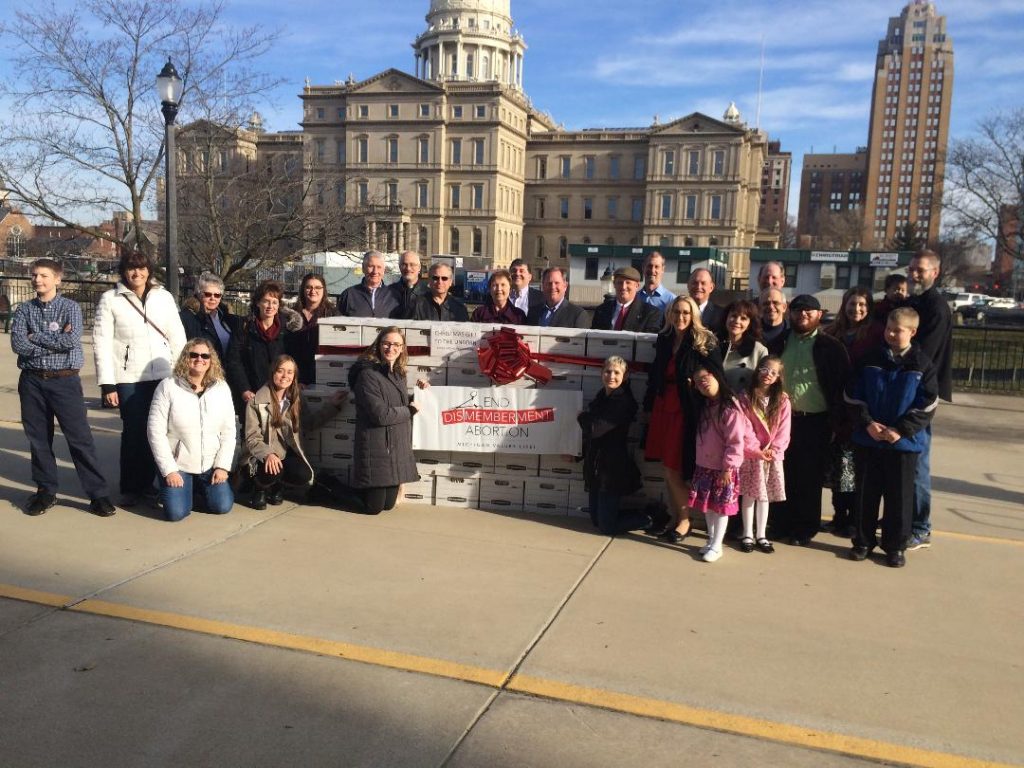 December 23, 2019, Lansing, MI — The Michigan Values Life coalition submitted 379,418 signatures believed to be valid to the Michigan Bureau of Elections today to initiate legislation to ban dismemberment abortions in Michigan.

Right to Life of Michigan President Barbara Listing said, “This is a wonderful Christmas present to the unborn. Michigan values life, and it’s time for an end to these violent late-term dismemberment abortions.”

The legal signature requirement for citizen-initiated legislation in Michigan is 340,047, based on the total votes for governor in the previous election.

Listing said, “Our committed all-volunteer force persevered through significant obstacles that kept being put in their path this year. We’ve received more than 400,000 signatures, but after thorough checking, we’ve whittled it down to our final total of valid signatures.”

A change in the petition law in 2018 required a change in Right to Life of Michigan’s time-tested validation process. Each petition received has been checked at least four times.

Listing said, “We set a state record for the highest signature validity rate with our 2004 petition drive to ban partial-birth abortions. We hope our dismemberment ban meets or exceeds that validity rate of 97 percent.”

The Bureau of Elections will take several weeks to determine the validity of the submitted signatures, and once enough signatures are confirmed the legislation will be sent to the Michigan Legislature. The Legislature will have 40 days to consider the dismemberment ban, which after successful majority votes will become law without Governor Gretchen Whitmer’s signature. Initiated legislation that isn’t passed into law is placed on the general election ballot for a public vote.

Listing said, “The 379,418 people who signed their names on this life-saving dismemberment ban should be confident that our prolife majorities in the Michigan Legislature will pass the bill again, just like they did back in May.”

The dismemberment ban bills include an exception if the mother’s life is in danger. However, in published research on reasons women have abortions, the pro-abortion Alan Guttmacher Institute has stated that most late-term abortions are done for economic or social reasons.