The Most Partisan Impeachment in our Nation’s History

Impeachment is one of the most consequential actions the House of Representatives can take. Throughout this process, Speaker Pelosi and the Democrat Majority have broken historic bipartisan standards, denied the President due process, and moved the goalposts time and again in order to shape their desired narrative and outcome. The fact that 44% of my Democrat colleagues voted to impeach the President of the United States before the Ukraine Call on July 25th even took place exemplifies their partisan desire to remove this President.

Our nation’s founders warned about using impeachment as a political weapon. On December 18th, Speaker Pelosi ignored those warnings and the House proceeded with the most partisan and divisive impeachment vote in the history of our nation. 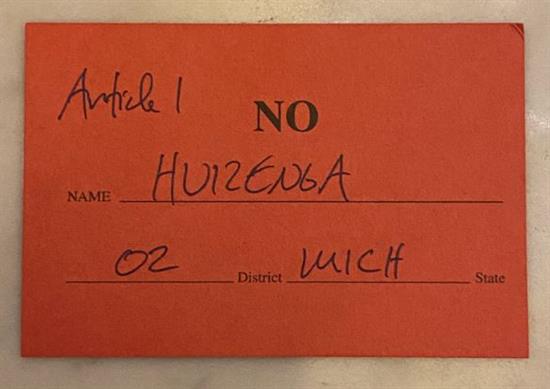 The Democrats’ endless drive to impeach this President has further divided our nation and damaged the House of Representatives as an institution. By making the decision to abandon the Judiciary Committee and conduct the majority of the impeachment proceedings behind closed doors through the Intelligence Committee, Speaker Pelosi has set a dangerous and partisan precedent that will have a chilling effect on how constitutional matters are handled in the future.

After reviewing the facts, I believe Speaker Pelosi, Adam Schiff, and their Democrat colleagues have failed to make their case for impeachment. In just under 11 months, the American people will go to the polls and have the opportunity to vote and make their selection for President. By engaging in a rushed, partisan process, Democrats are seeking to either overturn the outcome of the 2016 election or influence the 2020 election – neither of which should be acceptable to the American people. 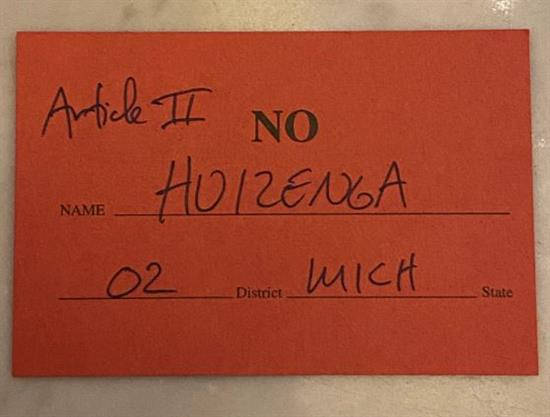 The photos above are the voting cards marking my votes against impeaching President Trump. The next morning, I spoke to WHTC to discuss the votes and Speaker Pelosi’s decision not to send the articles of impeachment to the Senate. You can listen to the interview here.