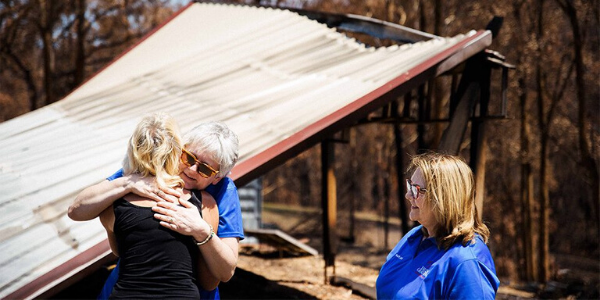 As Australia faces one of its worst bushfire seasons in decades, crisis-trained chaplains from the Billy Graham Rapid Response Team (RRT) have been ministering to dozens of hurting hearts, offering a listening ear and sharing a message of hope to distraught residents. “We’ve moved away from farming areas and are now working along coastal areas where there’s a higher number of people in little towns,” explained Stewart Beveridge, RRT manager of Australia/New Zealand. “When teams go there, we’ve seen total loss.”

While chaplains have been serving in various parts of the continent since September, they are currently ministering in Bairnsdale, Victoria, and Batemans Bay, New South Wales—marking the first time the team has run a simultaneous multi-site deployment in Australia.

“What’s made this situation stand out so much is the scale of disaster,” Beveridge continued. Many have lost their lives to the bushfire crisis. With such a high magnitude of tragedy, RRT chaplains from the U.S., U.K. and Canada traveled to Australia to offer a ministry of presence to homeowners.

Volunteers from Samaritan’s Purse, a humanitarian aid organization also run by Franklin Graham, have been helping these communities recover. Along the way, homeowners have been requesting visits from RRT chaplains, which is “an Australian first,” Beveridge said.

“We’re at a really hard phase,” Beveridge said. “But chaplains are here to help people move from one place to another, helping them to think about the big possibilities, the eternal possibilities—that the reality of God is present in every situation of life.”

The RRT will continue to provide care for fire-affected communities through February. Crisis-trained chaplains have also recently deployed to DeSoto County, Mississippi, and Spartanburg, South Carolina, following tornadoes in both areas. On Jan. 22, the RRT wrapped up its four-month deployment in Man-O-War, Bahamas, after Hurricane Dorian. Chaplains continue to serve in Rockport/Pearland, Texas, and daily at the Billy Graham Gravesite.

For more information on the ministry, including videos, photos, news articles and an interactive map of former and current deployments, visit BillyGraham.org/RRT. Updates can also be found at Facebook.com/RRTChaplains.