1. Call to Order
President Roger Vanderstelt called the meeting to order at 7:00pm.

3. Approval of September 29th Meeting Agenda
Roger asked to add Tree in Park to the agenda under New Business. Motion made by Amy to approve the agenda with the addition of Tree in the Park, supported by Jeff. With a unanimous vote, the motion carried.

4. Approval of the August 17th Council meeting minutes
Motion made by Amy to approve the August 17th minutes, supported by Jeff. With a unanimous vote, the motion carried.

5. Public Comment
Brian Hosticka, Local Democrat, introduced himself as a candidate running for the 91st District seat of the Michigan House of Representatives. He is an assistant prosecuting attorney for Muskegon county.

7. Reports from Officers
Amy will report under agenda items.
Jay advised the Planning Commission’s next meeting is October 13th. He anticipates a draft of the Master Plan to be presented to council in November or December. The PC will also be reviewing a site plan for Waypoint Dock & Deli and a concept drawing for a business that will occupy the old Village Inn location.
Carl had nothing to report.
Bill gave an update on the library. The director and another employee have taken job elsewhere. One of their 3 air conditioners need replacing. Bill also discussed plans to earn interest on the balance in their bank funds.
Jeff has been working on bids for sidewalks and questioned trimming of bushes.
Roger advised he is working on several items, removal of sidewalks, catch basins in need of repair and boat launch suggestions. Roger advised that the S curve on Bridge Street work and the sink hole on Brooks will be done when the rain clears out. Roger also spoke to Fred Younkers from the Lions’ Club. Old Fashioned Christmas will not take place this year. They will put up the Christmas Trees, walls around the picnic shelter and decorate. Roger also questioned being reimbursed for an expense. Amy suggested this be an agenda item at the next meeting. All agreed.

9. MSU Sustainable Built Environment Initiative
Ann shared an email with Amy, Jay, Roger, and Jen Cross from Planning Commission about a design concept program through MSU. Amy agreed to research it. She contacted Wayne Beyea at MSU. He advised they work with local government for design concepts like downtown beautification. They discussed design work for the acquired park property and beautification of streetscape on 3rd Avenue. The students would work with professionals and community to gather ideas for their renderings. An application would need to be filled out, including letters of support. Amy checked with David Jirousek and he felt this would be the next step in the implementation of the Master Plan. A discussion took place and the council is in favor of Amy pursuing this further. There could be a cost involved. Amy will report at the next council meeting.

10. Playground
Amy advised she has been working with Ann and Jen Cross in the formation of a Playground Committee. They met with Rose Dillon and Bill Overkamp to discuss the library and new playground. On September 2nd they met with Jeremy Bosman, Sinclair Recreation at Pomona Park. Two locations were discussed. The group visited playgrounds in the area and provided input to Jeremy. He will provide concept drawings for review. There are ways to reduce the cost, a Community Build where volunteers work with Sinclair Recreation to install the playground, grants available through Game Time (the manufacturer of the equipment), Smiley and other fundraising ideas. The goal is to complete the project in 2022.

11. Power Boxes/Photo Eyes on 3rd Avenue
Bill presented 3 estimates for the Power Box work. Motion made by Bill to accept the quote from Tandem Electric and not to exceed $3000.00, supported by Amy.
Roll Call AYES: Rothenberger, Haack, Overkamp, Bolt, Guiles and Vanderstelt
NAYS: None
Absent: Pope

12. Tree in Park
Roger advised there is a dangerous tree located near the bathroom in the Park. He presented 3 quotes. Motion made by Amy to accept the quote from Get R Cut for $1500.00 and that the work needed to be completed within 5 days, supported by Jeff.
Roll Call AYES: Rothenberger, Haack, Overkamp, Bolt, Guiles and Vanderstelt
NAYS: None
Absent: Pope

13. 2020 3rd Avenue Project
Jay gave an update on the project. It was delayed 3 weeks because of a sub-contractor. The new date is October 5th and they are still committed to completing the road portion of the project by the end of October. Jay has asked for an updated project schedule.

14. Village Logo/Motto
Amy thanked council for their input on the logo. She has shared the information with David Jirousek who is facilitating the work on the logo.

15. Kayak Launch
Amy advised that additional information was needed by the DNR. The requested information was submitted, and we have received approval for the funding. The project has been postponed til next spring due to COVID-19 and the high-water levels.

18. Adjournment
Motion made by Amy to adjourn the meeting at 8:09pm, supported by Carl. With a unanimous vote, the motion carried.

Click the image below for the attachment to the Village of Fruitport’s September 29, 2020, Council Meeting Minutes (PDF format). 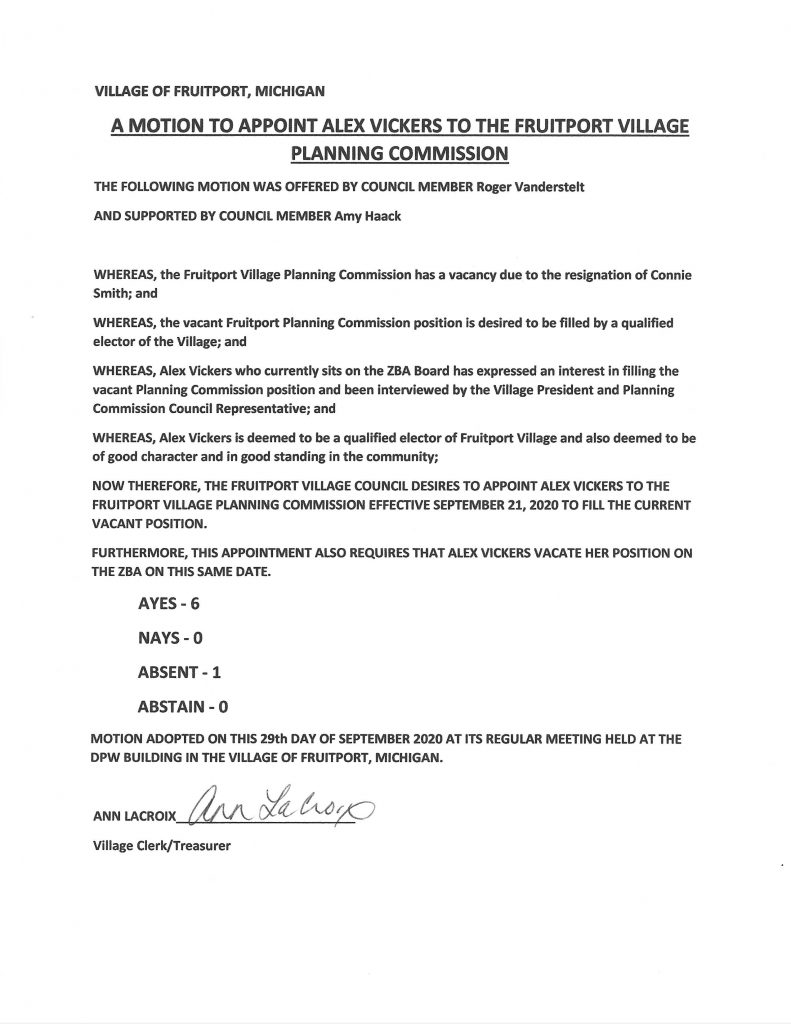