Dear Dr. Universe: Why do flowers smell so nice? – Miles, 5 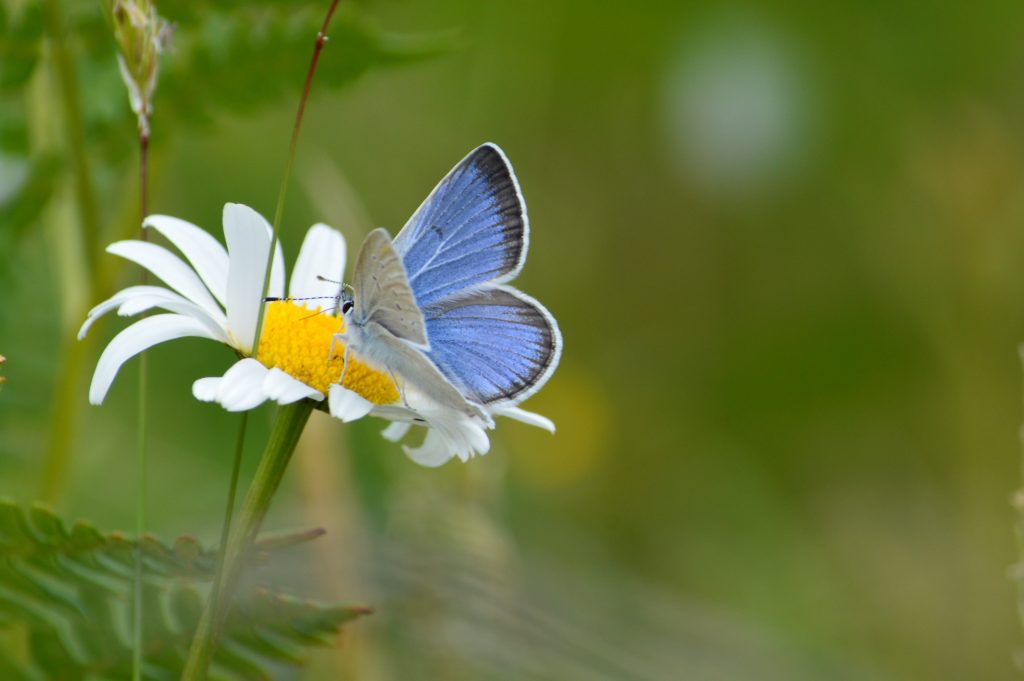 Photo by Rachael Bonoan of a Puget Blue butterfly on a daisy. Some insects can pick up a scent with receptors in their feet.

Flowers not only smell nice to humans, but also to many insects and birds who help the flowers do a really important job. Let’s imagine that you are a bee or a butterfly. You don’t have a nose on your face, but instead use your two antennae to smell things.

As you fly around, you catch a whiff of chemicals floating in the air. Down below, you see a field of daisies. The flowers are releasing some chemicals, which are the building blocks of a smell.

You fly down to the field and land on a daisy’s petal. It’s just what the flower wanted you to do.

Not only can you drink nectar from the flower to get some energy, but you can help the flower get ready to produce even more flowers.

As you sip on the daisy’s sweet, liquid nectar, the hairs on your body start picking up pollen, sticky grains on the flower. If you are imagining yourself as a bee, you might also use your front legs to put the grains into your pollen baskets, or pollen pants, near your back legs.

That’s what I found out from my friend Rachael Bonoan, a scientist with the Conservation Biology Laboratory at Washington State University.

She told me that bugs, birds, bats, and a few other animals make up a group called pollinators. They carry pollen around from flower to flower. The process is called pollination and it is kind of like a matching game.

Different flowers will send out their own unique smells to attract the right kind of pollinators. Not all of these smells are sweet, though. Even stinky flowers need pollinators to survive.

Flowers send out their chemical messages, or smells, at different times of the day. Jasmine and Honeysuckle are a few of the flowers that release their smells at night. They do this to attract insects like moths that are awake when it is dark out.

Insects also pick up smells from a flower’s leaves. And in addition to their antennae, some insects that walk around on plants can even pick up a scent with receptors in their feet.

Bonoan studies one of these insects in the Pacific Northwest. It’s called the Puget blue butterfly. She told me that a leaf’s smell is likely one way these butterflies decided where to lay their eggs. Smell plays a big part in how pollinators and plants can help each other survive.

Humans also really like the way flowers look and smell. We plant gardens, which are great places for pollinators to do their work. Do you have a favorite flower? What kinds of pollinators can you spot in your neighborhood? Tell us about it sometime at Dr.Universe@wsu.edu.